In thinking about mental health – or, indeed, health in general – is there a spiritual dimension that needs to be considered?
Talk of ‘spirit’ or ‘spirituality’ is a big turn-off for many thinking people these days.  Here in the UK where secular and atheist attitudes seem to be on the rise (not that secular and atheist are necessarily the same thing), matters of spirit get cast aside as vague, unverifiable, or even non-existent.
I make no secret of the fact that I was brought up in a Christian tradition, and I remain a person of faith (though no longer affiliated to exactly the same tradition in which I was raised).  But I am also the kind of person who asks questions.  Just because someone in a position of authority (religious of otherwise) says something, doesn’t necessarily mean I will accept it.
The point is, however, that I draw on my particular background in trying to understand and make a case for the spiritual.  In doing this, what strikes me is how ordinary and natural the spiritual is.  The Hebrew word ruha and the Greek word pneuma – used in the Old and New Testaments of the Bible respectively – are both translated into English as ‘spirit’.  The words ruha and pneuma are both about ‘breath’ or ‘wind’, they are about ‘motivating force’, about the ‘engine’ that ‘drives’ us – or ‘drives’ any living thing.  You don’t have to be religious to recognise that life has – and is – a kind of energy.
So, spirituality is about the ‘stuff’ that drives us, that motives us, that keeps us moving.  But where there are problems with mental health, we can see that something about the spirit of a person is inhibited or threatened (in a less enlightened age we might have said that such a person was 'possessed' by an bad spirit!).  Indeed, in any area of human life where we see things going wrong – relationships falling apart, violent competition taking over, etc. – we can see that something about the spiritual has become disordered, that it isn’t working properly.  A person's spiritual motivation becomes diseased – i.e. dis-eased, not at ease.
In thinking about a spiritual dimension to health, we are thinking about finding ways to make the human spirit more ‘at ease’ in order to bring about helpful improvements.   This could mean different things for different people, but I would suggest that everyone might well benefit from taking the spiritual more seriously – the spirit (that ‘engine of life’) needs to be nurtured rather than ignored.
We live in a world that likes to find mechanistic solutions to mechanistic problems.  If someone has a mental health problem, very often we look for a fault in the ‘mechanism’ of the mind or brain and then try to fix it, either with drugs or with other therapies (sometimes we don't even look for the fault, we just assume it's there).  I’m generalising, of course – mental health workers would quite rightly be annoyed at my simple stereotype of their work!  But the spirit is about more than than that – it's about the whole self, the whole human race, and the whole of life all together: the spirit is life.
I would suggest, therefore – and you are free to dismiss this if you think I’m talking nonsense! – that we should all work on developing the spiritual for the sake of ourselves and for the sake of one another.  We may each do this in different ways using different forms of private meditation and/or collective sharing (or whatever you may call particular activities that have the same basic qualities).
For the sceptics – and I could so easily be one of them – I must add that I’m not trying to sell anyone a miracle.  I am merely suggesting that there is indeed a spiritual dimension and that acknowledging it (working with it, not against it) might be helpful.
____________
Delivered Unto Lions by David Austin is published by CheckPoint Press (Paperback and eBook)
ISBN 978-1-906628-21-5
For more information visit www.davidaustin.eu
Posted by David Austin at 11:46 No comments:

Mattheiu Ricard's book The Art Of Happiness (published by Atlantic) is a volume I would recommend very highly. It needs a bit of self-discipline to work through it — it isn’t a casual read — but it is well worth making the effort. 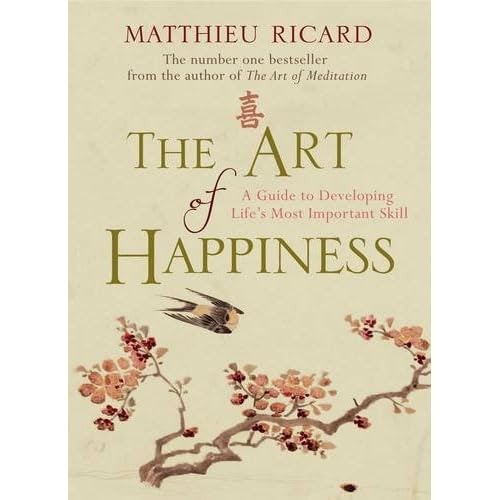 The author is a Buddhist monk with an academic background in genetics. More recently, he has conducted research into the neurological effects of meditation. Meditation is, indeed, very much commended in this book, and the author draws on both the natural sciences and Buddhist tradition to present an approach for increasing your 'happiness skills'. It’s probably worth mentioning that the British quality press has described Mattheiw Ricard as 'the happiest man in the world' (a claim prompted by results of an MRI scan of his left pre-frontal cortex).

Some readers of a resolutely secular persuasion may find the idea of some Buddhist content off-putting, as may those of other religious traditions. In fact, the Buddhist content, though definitely present (and, in my view, of interest in itself), isn’t overly emphasised. The author does not attempt to indoctrinate the reader; essentially, he is offering a methodology — and a frequently effective one at that.

This book is not a miracle cure for unhappiness, but it is a beneficial “prescription” for improving emotional well-being.
____________

The Art Of Happiness: A Guide To Developing Life's Most Important Skill by Matthieu Ricard is published by Atlantic (Paperback)
ISBN 978-1-59285-099-0

Delivered Unto Lions by David Austin is published by CheckPoint Press (Paperback and eBook)
ISBN 978-0-85789-273-7
For more information visit www.davidaustin.eu
Posted by David Austin at 10:47 2 comments:

David Austin
David Austin is a writer whose novel, Delivered Unto Lions (CheckPoint Press), is a factually-inspired narrative following the traumatic experiences of a child admitted to residential psychiatric care in 1970s Britain.